In the second part of my London trip report I will cover the West Ham – Southampton match and tell you how hard it is, to get tickets to a sold out premier league match.

On December 28th several fixtures took part in London. My initial plan was going to West Ham United – Southampton FC, but the days before I heard various times, getting tickets will be difficult. I was thinking of going to the championship match of QPR instead, but in the end I decided for West Ham. This was probably my last chance to see Boleyn Ground, so I was willing to take the risk of not getting a ticket. This would result in watching it in the famous Boleyn Pub, which would not be to bad either. To pass time until kick-off I went to visit Emirates. It is almost as gigantic as Wembley, but to my mind the relocation was a success. The Emirates is in walking distance to the old Highbury and historic monuments like the famous clock have been moved too. With regard to the atmosphere the Emirates also profits from it’s directly surrounding peoples homes. On matchdays some even sell food our merchandise from their porch. 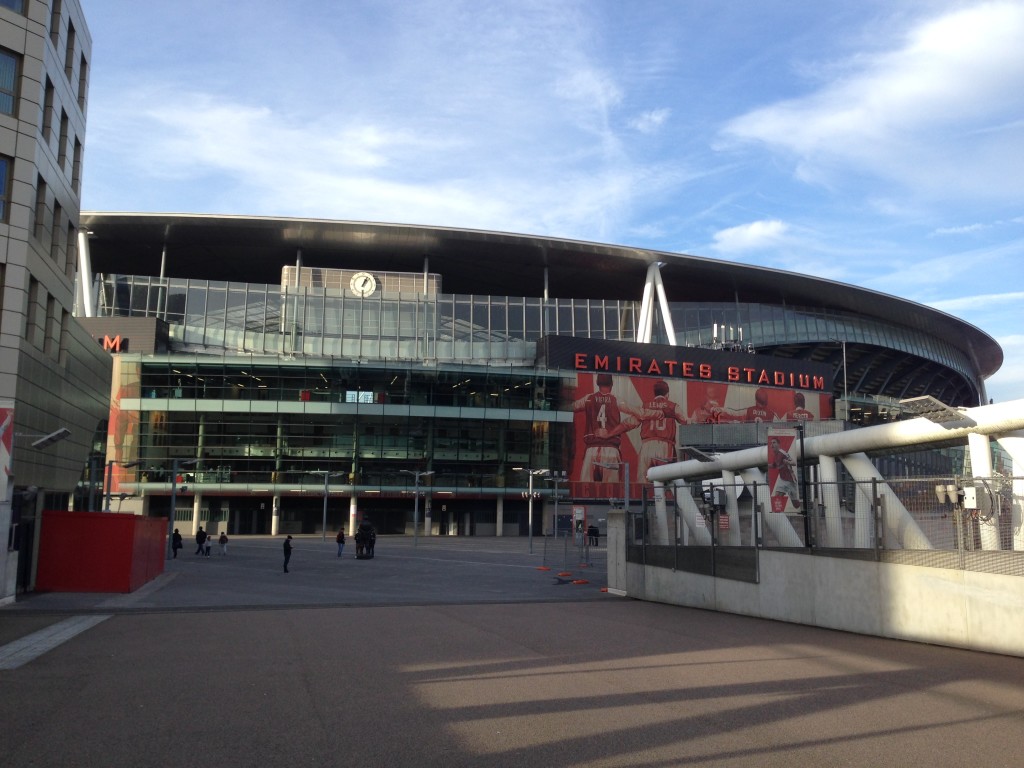 Afterwards I wanted to take a look at the new homestead of West Ham, the Olympic Stadium. When I got off Stratford I realized it was still a fifteen minute Walk, oneway. So I skipped and went on to Upton Park. Around 2:30pm I reached Upton Park and walked pass the Boleyn Ground. My first target was Boleyn Pub, right next door. Hopefully I would be able to find tickets or information how to get tickets in there. It was still early but the pub was already well-attended. On an outer table I met four germans. Of course they already had tickets, but no spare one. I asked some Hammers, where leftover tickets are usually sold. Opinions were diversified, some answered around the ticket offices, others said at the underground station and again others proposed to walk around between station and stadium.

I started combing the suggested places. The official ticket offices were open, but sold out and there was no one around selling tickets. Maybe it was to early, but I told myself, I will not return to the pub without a ticket. So I walked to the underground station and back to the stadium. In the end I walked each way around five times and probably asked every single spectator about a spare ticket. Finally  someone in front of Queens Pub answered positive to my question. It was a danish guy wearing a West Ham tracksuit top. He was visiting with some friends and to my luck his brother was ill. He showed me a ticket, 55£, Betway Upper Stand. „You can have it for 50,“, the Dane said, „but you will be sitting next to us.“ With that circumstance, I could live very well. 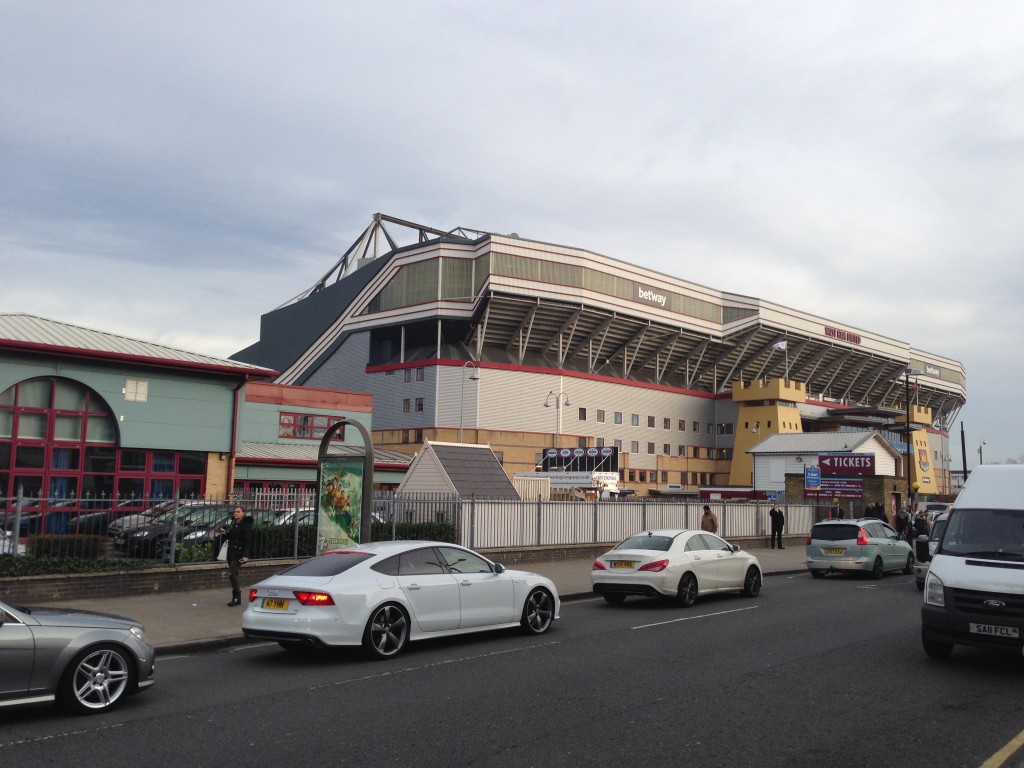 I was relieved and returned to Boleyn pub to watch the second half of the current premier league matches. Instead Scottish Premiership was broadcasted. This made me remember, that 3pm fixtures will usually not be broadcasted in England, so the stadium keeps it’s unique feature. The people did not care much about the TV content anyhow. I believe, everybody outside the UK has a general idea about the combination of english football fans and pubs. I can assure you, reality is exactly like what people see in videos and movies. The pub has a big, carpeted room. There are no tables and chairs, just a TV on the wall. Meanwhile the pub was jam packed. In the middle of the room, various fans started singing chants and the crowd sang along. At first I was sceptic, if they would tolerate someone filming. But literally everybody was filming with their phones. In Germany the core fans would never tolerate to be filmed by strangers, but in England they seem to enjoy it. The West Ham fans sang all the classic chants, like „West Ham til I die“ and „Forever blowing bubbles“. Besides they were singing a nice song with the melody from „Achy Breaky Heart“ for a few times. I was not able to understand the lyrics completely, so I looked it up. Thanks to the internet I know, that it is a song to honor the newly gained Dimitri Payet from Olympique Marseille. Suddenly everyone was putting on their hoods. They knew what was going to happen. „Let’s go fuckin mental, let’s go fuckin mental, lalalalaa…..“ the crowd was singing, pogoing and beer cups were flying through the room. Afterwards the people got a new beer as if nothing has happened.

Shortly after 5pm I left the pub for the match. On the short way I bought a program and went inside the stadium. When entering I realized how different the turnstiles in England are. The german ones, reach to your waist, the english reach over your head, prison-like feeling included. There is no way to get inside the stadium without a ticket. When the teams entered the field, „Forever blowing bubbles“ was played again. This time real bubbles are blown in the wind alongside with the players. The match was noticeable faster than the Millwall game. Southampton was controlling the match, especially for the first 30 minutes and deserved the 1:0 lead at half time. The large away section was pleased and they sang „Oh when the Saints go marchin in…“ for a couple of times.

At break I took a look at the food options. There was only boring looking hot dogs and no pie, so I passed. In second half West Ham was getting better, but mostly because Southampton was hardly attacking. West Ham was able to equalize at minute 70. All involved could have been happy with one point, except for my ticket-seller. He placed a live bet on Carroll the score the next goal. Indeed 10 minutes before the final whistle a dangerous cross flew into Southampton’s box, Carroll missed at first, Valencia headed at the crossbar, the ball bounced back and Carroll easily converted. West Ham turned around the match and the dane got his travel expenses back.

During the match the atmosphere was again english-like. There have been a few chants from both fan groups though. Interestingly the home fans at Bobby Moore Stand were standing throughout the whole match. There has also been another smaller group of standing Hammers at East Stand, directly next to the away section. Those fans started a few chants, which made me think they were mostly fans from the core scene of West Ham. However, German authorities would not be happy with this way of separating fangroups. After final whistle the Hammers sang „Oh, when the Saints go down two-one…“ to answer the prior chants from the southampton supporters.

I walked back to underground station Upton Park for the last time, wondering how the small station will handle the massive amount of fans. The solution is pretty clever. The station is barricaded and people wanting to take the underground have to walk down the road next to the station, which is about 400 meters long. At the end they can get in a queue and walk back to the station. Since the English are used to queues it worked out pretty fast. Later that evening I met up with Flo and Roman, the germans I met at the airport. They wanted to have dinner at a place with the appealing name, Burger & Lobster. Sadly it was closed, as so many others on christmas. Alternatively we sat down at an american diner next door. The food was more than decent, but no beer was served. After we finished our meals we quickly moved on to find a pub.

Again, we landed in Shoreditch, where several pubs were closed also. A freshly-opened looking bar was still open. It was a typical hipsterbar, rustic furnishings and unknown beers from smaller breweries. Flo made a horrible beer choice again. To let you know „Choco Loco“ has a really special taste. When the bar closed, we tried to find something else. We ended up in a location, half bar, half club, were beer was served in cans for 5,50£. Also it was german Beck’s, so visiting this establishment is not mandatory for tourists. Furthermore Flo lost one of his contacts. The next day he had to find out, contacts are sold on prescription. So in the evening, at the Fulham – Rotherham match, he had only one eye vision. To find out what else happened at craven cottage, feel free to take a look at part three tomorrow.

If interested, you can find part one of the trip report here.