Since I have never seen a football match in England, Boxing Day 2015 was marked in my calendar for a long time. Planning started early, but I ended up booking pretty spontaneous. I was aiming at visiting Boleyn Ground, Craven Cottage and The Den. Though I did not book any tickets in advance, I was hoping that things would work out.

My flight to London took off in the evening of December 25th. After arriving in London at around 9:30pm, a problem occurred. The underground was closed due to Christmas. While looking for a bus, I met two german guys. Their plan was watching Tottenham, Darts, Arsenal and Fulham. So we already had one common activity. We were fortunate a bus took as to Victoria Station. Even better, the ride was free, since there was no possibility to buy tickets this late. From the bus station we shared a cab with another german girl. At around 11pm I arrived at the hostel, which turned out to be quite nice. It was clean and even had breakfast. Only I found out about that two days later.

The first thing next morning I had to get toothpaste and shower gel. I ran out of cash after that and went to get some. While looking for an ATM I also took a look at the famous Tower Bridge. You gotta do some sightseeing, right? On the way back I stopped at Borough Market. Sadly the market was closed, but some adjoining diners were open. I was getting a sandwich called „The Breakfast Club“, with sausage, bacon and egg. Even with a tray, eating this was a challenge. Afterwards I started walking to „The Den“, since Google Maps said, it is only 2.5 miles away. I arrived just under an hour before kick off. Outside the stadium I met two german fellers and we started looking for beer, of course. At first I went to the bathroom of Millwall Cafe. My demand for beer in there was denied though. We had to walk to the back of the stadium. On our way, we stopped to get tickets. They paid already in advance and picked up their tickets. Before I could get in line to get a ticket, an older gentlemen approached me. He had a spare ticket for 10£. Regular tickets started at 27. He seemed trustworthy, so I agreed. Later I had no problems when entering the stadium. My only mistake was picking the wrong entrance first. So some regulars were joking around „It’s always ‚ze germans“. 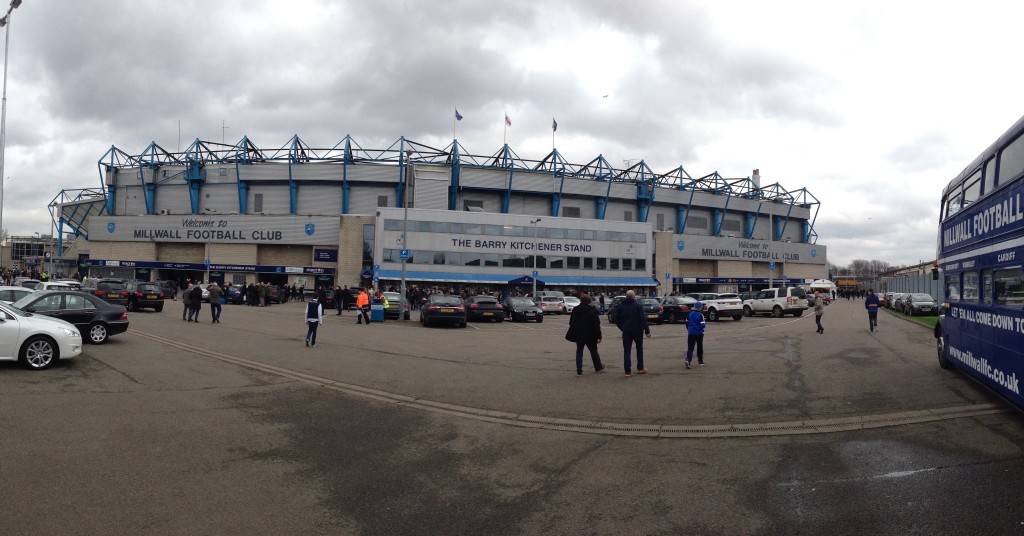 But before that we were still in the hunt for beer. When walking around the corner of the stadium we saw a memorial place. Immediately we thought of fallen hooligans buried there. A couple of meters closer to the the stand, there was a tent with some tables, two TV’s and a beer stand. We got a round of beers and were surprised. They were using the „Bottoms Up“-beer system. As the name already explains, the cups are filled from the bottom through a hole. This opens the possibility to tap beer in a record-braking time, which was absolutely not necessary. Todays match had around 8500 spectators. In fact, since Millwall moved to the new stadium in 1993, „The Den“ with a capacity short over 20,000 has never been sold out. By then, the stadium was the first, new built, all-seater stadium after the Hillsborough disaster. Still it is a typical english stadium, with four separate stands, extremely close to the pitch. 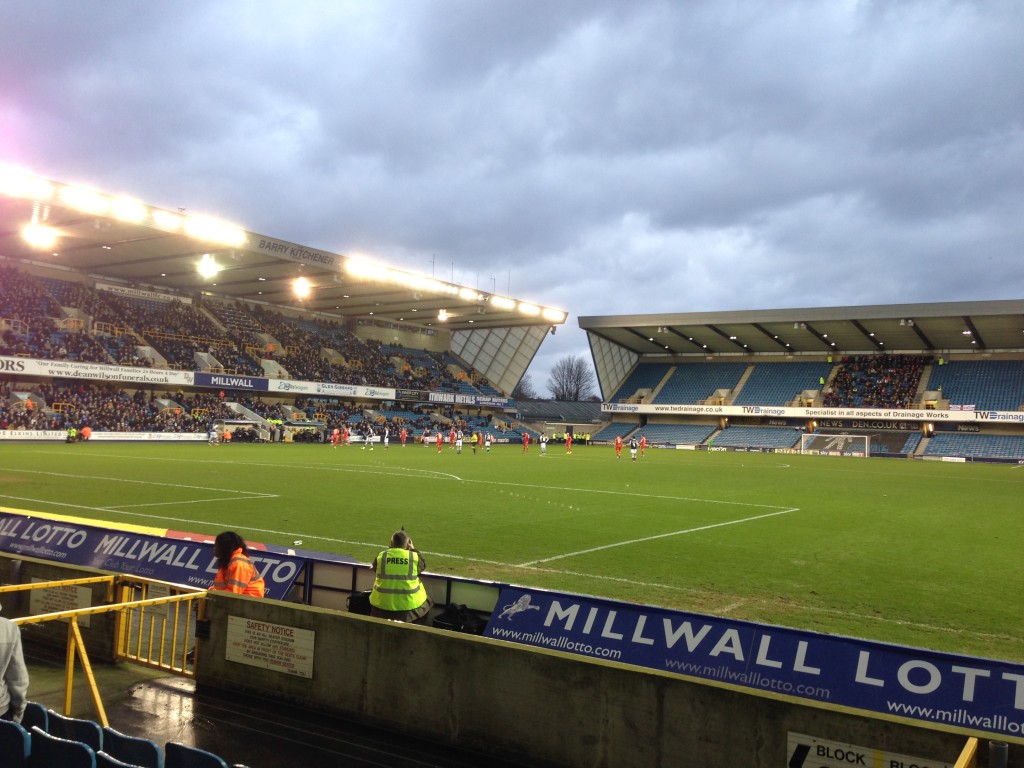 The match itself was semi interesting. Basically there have been no serious chances for both teams. Anyhow Walsall managed to score in the middle of the first half. I am not sure, if it was because Millwall was so desperately poor, but I have never heard the word „cunt“ that often in my live. The person next to me was swearing throughout the whole 45 minutes. When I went to the restroom, the Millwall fan with a little fewer hair stood right next to me and started insulting almost every single team member. Since I had no idea about the squad, I kept it with the penguins of Madagascar and tried to smile friendly. After that I bought my first english pie. It was a little dry on the sides, but it is definitely a good option beneath the german Bratwurst. As a downside I had this song stuck in my head afterwards for the rest of the day. Shortly after the match resumed Millwall had it’s best attempt, but failed to score. Until the end of the match no further highlights occurred. Surprisingly six minutes of extra time were announced. To my mind absolutely unnecessary, not only because there was a arctic wind going through the stadium. The atmosphere in general was pretty english, at least that is my opinion of english football atmosphere. The fans rather reacted to situations than singing. There have been some „C’mon Millwall“-chants after corners, but sadly the Millwall fans did not sing „No one likes us“. Only the small away section was singing a few times. 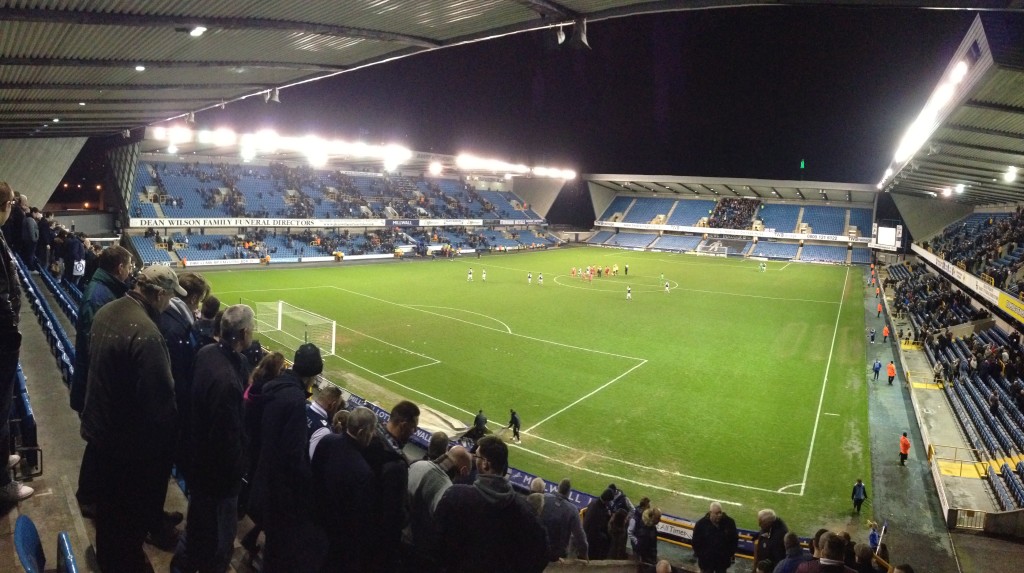 Ater the match I met the two german fellers at the Millwall Cafe. We were hoping to find a sports bar broadcasting darts and premiere league. Our first stop was a bar right outside the underground station London Bridge. They were showing Newcastle – Everton on several screens, but there was no possibility to see darts. We had a pint and moved on. We ended up in a sports bar next to my hostel. They served good burgers and on our demand, two TV’s were switched to the darts broadcasting. The evening match in the premier league between Southampton and Arsenal ended 4-0. After that, the germans left and I got into a conversation with two danish guys. They flew to London for the Chelsea – Watford match and wanted to go out tonight. A couple of hours and pints later, I had proof, that strip clubs are closed in London on boxing day.

The next day there were no fixtures, so I decided to take a look at some grounds. Because of my conversation with the Danes I got up later than expected. Around noon I left for Stamford Bridge. A completely different experience compared to the Den. The stadium is surrounded by a museum, two fanshops, two hotels, a restaurant and even a spa. Everything is kept in the Chelsea blue, even the euro pallets. I walked around the stadium. A tour would have been 19£, but I had further grounds waiting for me. 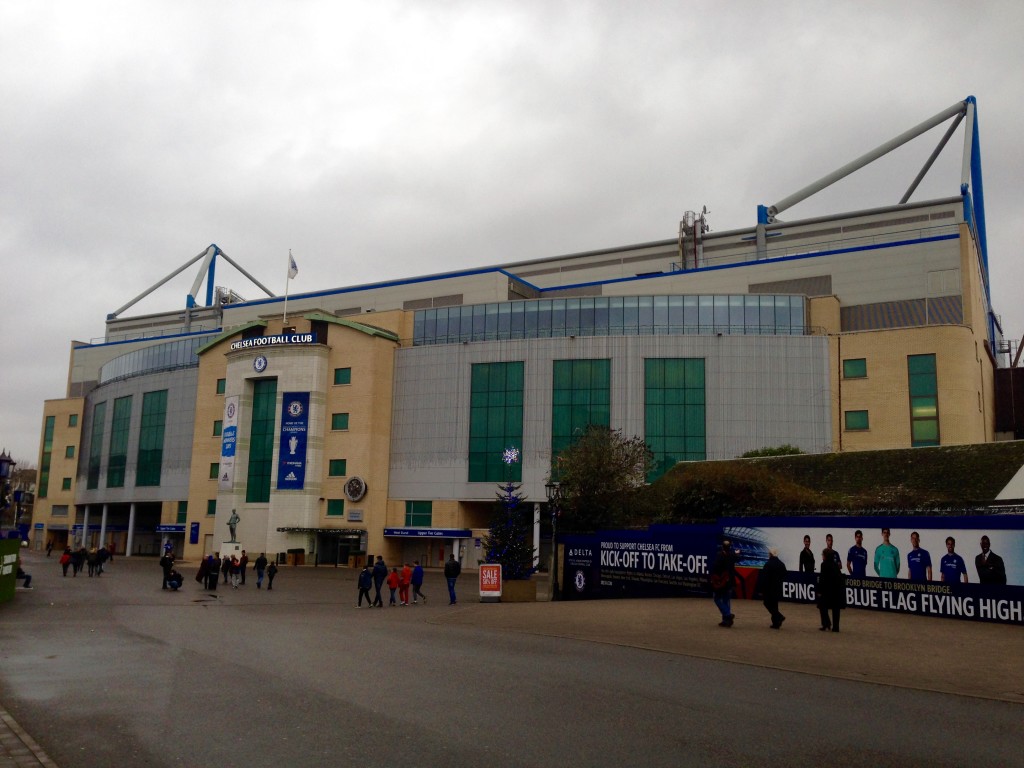 Next stop was „Loftus Road“, the homestead of Queens Park Rangers. It was less spectacular than Stamford Bridge and everything was closed. Even though tomorrow was a match day. So I traveled on to Wembley Park. Outside the underground station the giant stadium was well visible. The stadium is basically sitting in it’s own district. Surrounded by supermarkets, shopping centers, hotels and a football facility for amateurs with in- and outdoor-fields. For Christmas there was of course a christmas market with a big wheel. Will Magee once called it a non-place and I get why. The giant concrete stadium and it’s whole surroundings seem surreal. At least architects and carriers tried their best to bring life to this area, when there is no sports event or concert. A big wheel might not be the fans first choice, but the football fields definitely help creating atmosphere. They attach an ordinary feeling to the extraterrestrial stadium. 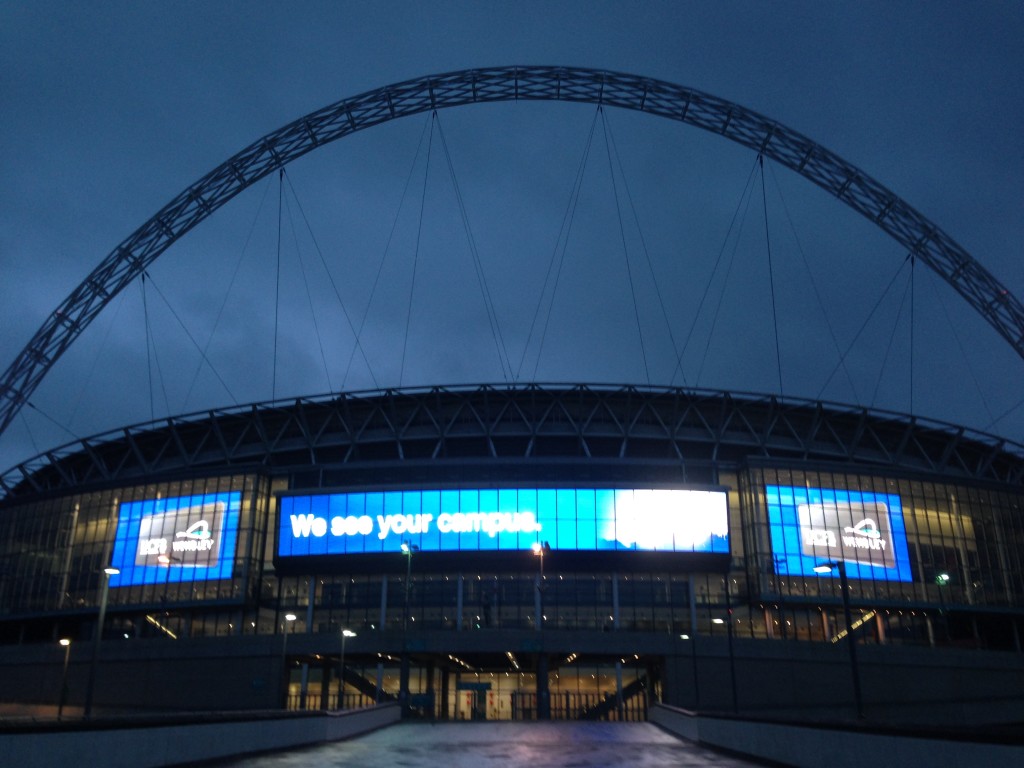 Meanwhile it has gotten dark. I did not manage to do all grounds, but I there is still time for more the following days. I receive a message from the two germans, I met at the airport. We decided to have diner in the „Draft House“ later on. Whilst eating we also tried several different beers. The food was really good, as well as some of the beers. Others were disg… let’s say not our taste. After we finished diner, we moved on to Shoreditch, a cultural interesting district. This resulted in a gentrification, which started a couple of years ago. We went to a nice pub called „Owl & Pussycat“ and ended up having wine and cheese at a french couples apartment. All in all, very interesting first two days in London.